Mysteries of the Natchez Trace

Today is our rest day as tomorrow our Nachez Trace Parkway travels come to an end.  We will leave natural beauty and highlights of American history behind and re-join the present day fast-paced world at Nashville TN.  The beauties of the Trace will linger on in our minds, but so will some on-going mysteries of that 444 mile long National Park. 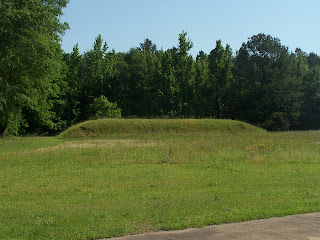 For example, Bear Creek Mound pictured here was built about 1200 to 1400 A.D.  However, as early as 8000 B.C. the site was a village established by a nomadic people who were hunters.  Later peoples in this location developed limited agricultural practices and built this uniquely shaped mound as a ceremonial to house sacred images.  Who were these peoples of the various eras of history?  Are they the ancestors of the groups we mistakenly call Indians?  Or did they disappear completely?  If so, why?  How did they build and shape this large earthen mound without any construction tools? What was their worship like? Our minds were filled with unanswered questions. 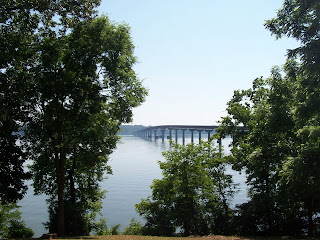 A little further north on the Trace we discovered another unsolved mystery.  Here at the Tennessee River, in the early 1800s, George Colbert of the Chickasaw tribe built and operated an inn (called a stand by early travelers on the Trace) and a ferry across the river.  Colbert's Ferry was the only way to cross the river before bridges, such as the John Coffee Memorial Bridge pictured here, were built. 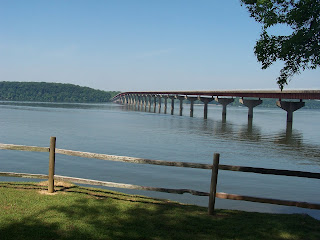 Colbert provided an essential service to the traveling public.  However, he also took care of himself and his family.  In 1814, General Andrew Jackson was traveling south on the Trace, pursuing the Creek Indians who had assisted the British in the War of 1812.  He and his troops arrived at Colbert's Ferry and requested transport to the other side.  Colbert, sympathetic to the Creeks, informed Jackson that the toll for their trip across the river on his ferry would be $75,000!  That was big money in those days.  Where did "Old Hickory" get that much money without access to ATMs or credit cards? 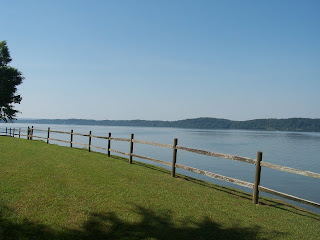 A dam was built upstream from the site of Colbert's Ferry some years ago.  It has transformed the Tennessee River into Pickwick Landing Lake pictured here.  George Colbert could really make a killing if he were still living, couldn't he? 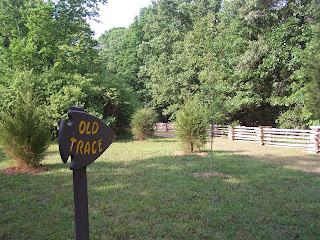 The old Trace hides one other interesting unsolved mystery.  Meriweather Lewis, Commander of the Lewis and Clark Expedition to the west coast, was traveling north on the Trace in the fall of 1809.  President Thomas Jefferson, his close friend, had appointed him Governor of the Louisana Territory and he was on his way to Washington D.C. to do a final editing of his journals from that historic 1804 to 1806 expedition. 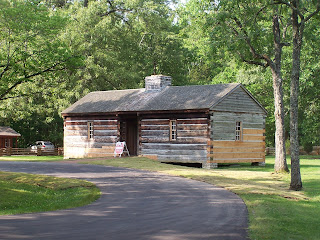 On the evening of October 11, 1809, Lewis arrived here at Grinder's Stand and made arrangements to spend the night.  The next morning, he was found dead in his room with a single gunshot to his head.  The proprietor of the stand had heard nothing during the night before nor was he aware of any other person coming or going during the night hours.  Meriwether Lewis was only 39 years old.  Was he a victim of murder or suicide?  That question has not been answered to this day, 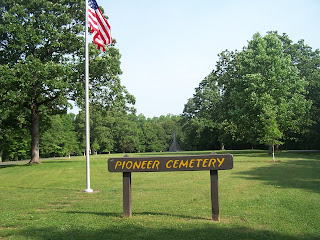 Near Grinder's Stand there was a small burial ground.  Lewis' body was laid there as its final resting place. 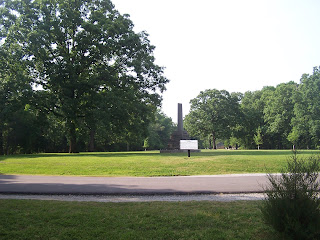 In 1848 the state of Tennessee erected a monument in Lewis' honor at the site of his grave.  The question of whether his death occurred at his own hand or at the hand of a personal or political enemy will probably never be answered.
Posted by Bruce and Mary Sue at 1:05 PM