Back "home" to Darke County, Ohio 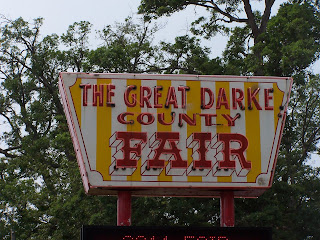 Darke County, in west central Ohio on the Indiana line, was home to Lowell Thomas, the famous news reporter, Zachary Lansdowne, pilot of the ill-fated dirigible The USS Shenandoah, and Annie Oakley. "Little Miss Sure Shot" of Wild West Show fame.  For 25 years, before we became RV full-timers, it was our home, too.  It is one of the foremost agricultural counties of the state, so the major social event for the county -- ever since 1853 -- has been The Great Darke County Fair. 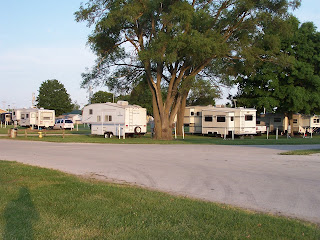 Fair week is not until August so during our visit this past week we rented one of the campsites available on the fairgrounds. 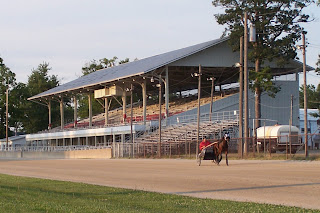 On our morning walks we enjoyed watching the horses as they were exercised on the race track in front of the grandstand.﻿ 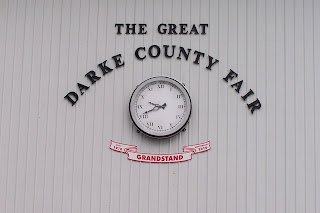 Last year marked the 100th anniversary of the grandstand, center of  the Fair activities. 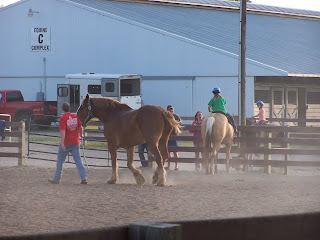 Several evenings a week as we walked, we watched young 4-H members practice their riding and showmanship skills. 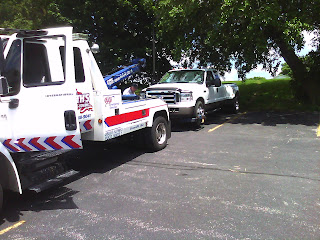 It was fun to visit dear old friends and once again tour familiar places, but there was not a twinge of homesickness.  We were ready to move on in our travels, but our truck had other ideas. Yesterday, after  we enjoyed lunch with friends, it would not start! Was it jealous of our delicious lunch?  or staging a non-starting strike? did it need a vacation from traveling?  or was it just pure cussedness?  We'll never know but the tow truck took it to the nearby Ford dealer and we rented a car.  Twenty four hours later, after all tests were run and computers checked on the misbehaving machine, the mechanics were unable to replicate the problem and released the truck back to us. They had no idea why it didn't start and, being unable to fix anything, they didn't even charge us for their labor!
Tomorrow off to Indiana.
Bruce and MarySue
Posted by Bruce and Mary Sue at 9:29 PM