Yesterday, Bruce gave me a dump lesson. Actually, I’ve been dumping for years, but not that smelly kind of stuff that accumulates in the "black water tank" of an RV.
From an early age I tried dumping guilt upon my parents, but my Mother, wise woman that she was, put a quick end to that. "Sorry, my dear," she responded to my guilt-dumping attempt, "I have enough sins of my own to answer for. I’ll not accept the responsibility for yours!"

I was no more successful in trying to dump guilt upon my husband-to-be. On a cold November day, he silently opened the car window, letting in a blast of wintry wind. "What are you doing?" I shrieked.
"Just making room," he replied calmly, "so that what goes in here (pointing in his right ear) and comes out here (pointing out of his left ear) can keep on going!"
But the kind of dumping Bruce was teaching me yesterday involved stuff more tangible than guilt. He’s been trying to teach me for years and I’ve always watched carefully as he did it. But then, I’ve always found some way to be "busy" the next time it needed to be done.
This time he’s preparing for cataract surgery which will put restrictions on his bending over. So, I really did need to learn how to dump the "black water" (that’s an RVers genteel way of referring to feces or poop!).

We walked outside, around to the back side of the fifth wheel. There he stopped, folded his arms, and waited expectantly. Suddenly I realized that, unlike previous lessons, he wasn’t going to demonstrate for me how to do it. He was going to make me do it myself! 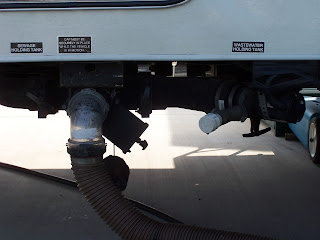 I looked down at the maze of handles – four of them – that need to be pulled and pushed at the proper time, and I froze! All I could think about was that scene from the movie RV when Robin Williams tries to dump the accumulation in the black water tank of the RV he has rented to take his family on vacation.
If you’ve seen the movie, you know what I’m talking about. He, too, did not understand the system of hoses and valves required for the task. He ends up getting sprayed by a geyser of the smelly crud when his sewer hose proves to be too short to reach the dump drain!
I knew I wouldn’t have that problem. Our sewer hose is securely mounted on one of those caterpillar-like sets of plastic legs that carries it downhill and directly to the drain. I don’t know what the proper name is for that little device, but I think it ought to be called a "craperpillar." 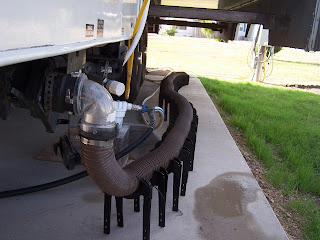 With a mighty effort, I pushed the images of geysers of liquid brown sludge out of my mind. I bent over and pulled a handle. It was the right one! Then I pulled a second handle, and I could see that the desired action was taking place. Just for good measure I pulled the other two handles – one at a time – and another gush of water, thinner and lighter in color than the first, poured forth down the sewer hose. I had dumped the "gray water" (dishwater, shower water, and stuff that’s not so contaminated), too. 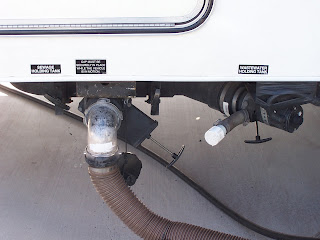 Then it was time to push the handles in and close off the valves, in the proper order, of course. That part wasn’t nearly so scary, but another image flashed through my mind.
Several years ago, at a state park in Louisana, Bruce waited in line for his turn at the public dump station. As he waited, he couldn’t help but hear the booming voice of a man behind him in line. The loudmouth was bragging about how most people don’t know how to dump properly, but he did.
Bruce completed his task, pulled forward out of the dump station and turned around just in time to see a disaster. The braggart had pulled up to the dump, connected his sewer hoses, placed the end down the drain, and pulled the release handle on his black water tank. Unfortunately, the hose connections were not tight enough and gave way under the pressure of the exiting fecal fluid! There was no geyser this time, but there was a wide-spread stinking mess and lots of quiet chuckling in the crowd around him.
So, I mentally patted myself on the back at completing the task in a clean and efficient way. Now, if I can just remember how I did it when I need to do it all by myself!
Posted by Bruce and Mary Sue at 12:36 PM