Where My Great-Great-Grandparents Once Lived 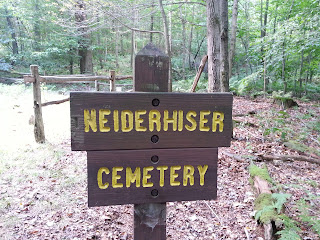 It started as an invitation to visit a cemetery where my grandfather's uncle was buried.   But when we got there I discovered that I was walking where my great-great-grandfather had lived and had operated a sawmill in the mid-1800s.

Last Saturday Mary Sue and I met my second cousin Don Neiderhiser who had offered to take us to the Neiderhiser Cemetery in Somerset County.  Don lives in Mt. Pleasant, PA, not far from where my mother, Ida Rae Neiderhiser grew up.  The Neiderhiser cemetery is ten to fifteen miles from my mother's home place--just barely across the county line into Somerset County, Pennsylvania.
The road to the cemetery is not open to personal vehicles, but beyond the iron gate it is well-maintained as a fire road through the state forest.

As we walked the gravel road toward the cemetery Don started pointing out landmarks:  "Those mounds of dirt on our right are the remnants of the earthen dam."  All of a sudden I realized where we were.  This land was once owned by my great-great-grandfather Jacob Neiderhiser who operated a saw mill at this very location.

We walked a bit further and Don pointed to a flat spot to our left:  "That is where Jacob and Eliza's house was located."  Jacob Neiderhiser had married Anna Elizabeth (Eliza) Pletcher on January 6, 1842.

As we started up the hill, Don pointed to an overgrown lane to the left:  "Jacob's barn and shop were back there." 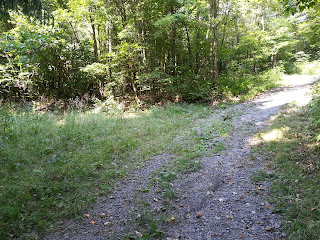 We continued on up the hill to a fork in the road where we turned left to get to the cemetery. 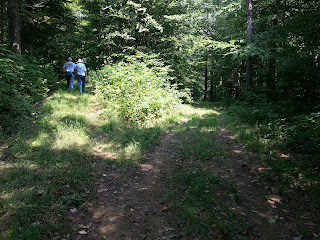 Across the cemetery opposite of the entrance is the monument to Samuel Neiderhiser.  Samuel, born on October 22, 1842, was the eldest of my great-great-grandparent's nine children. He died on July 8, 1898.   Also engraved on Samuel's stone are the names of three of his children who died in childhood. 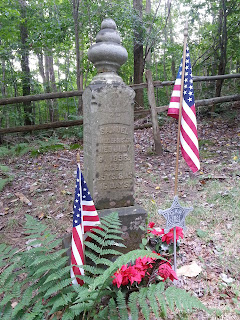 Of the two dozen stones in the cemetery Samuel's is the only one that is clearly legible and is the largest.   Don explained that the monument had been provided by the State since Samuel was a volunteer in the Civil War.  Samuel had served in the Civil War with Company B, 142nd Pennsylvania Volunteers.

There is only one other stone that is partially legible, but all that I can read is the deceased's first name, David. 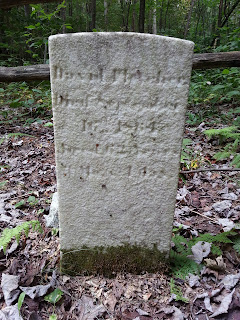 As we were leaving, Don explained that the time came when the saw mill was no longer productive for Jacob and he and his wife moved to the nearby town of Donegal where he worked as a carpenter.

After Samuel returned from the Civil War, he continued to live on that property -- apparently until his death.   Like so many other families of that time, the Neiderhisers established a small family cemetery on their own land.

None of my direct ancestors are buried here, but many are at the Porch Cemetery near Donegal, PA. Still, it was interesting to visit a cemetery bearing the Neiderhiser name and to discover the site of my great-great-grandparents residence.

Now I have new memories of the place where my great-great-grandparents lived and worked.
Posted by Bruce Rosenberger at 8:48 AM