First Cousin to a Tornado

In the late night hours of Monday, May 11 and the early morning of Tuesday, May 12, our RV park was hit by a storm.  It was not a full-fledged tornado, but there was some "family resemblance" to a twister.

From our safe shelter in a secure corner of the clubhouse, we could hear the frightening sounds of the tumult outside in the dark: winds reaching 80 miles per hour, driving torrents of rain, lightening  that lit up the sky like fireworks, and thunder claps that shook the windows around us!  We returned to our own trailer about 2 am when the intensity of the storm had passed,  but for several hours as we lay in our own bed, our rig shook like a cradle.

The next morning, on our usual morning walk, we were shocked at the extent of the damage visible within the park.

The park was fenced with 8 foot high sections of corrugated metal supported by 4 x 4 wooden posts embedded in concrete.  This was the view from the north fence line.  The wooden posts had broken off at ground level and become airborne projectiles as the metal fence sections blasted into near-by houses!

Houses were damaged by the flying debris: skirting blown away, windows broken or cracked, carports collapsed or torn off.  A friend's new truck was punctured by a flying fence post through the rear window of the cab.  The 4 x 4 came to rest on the dashboard! 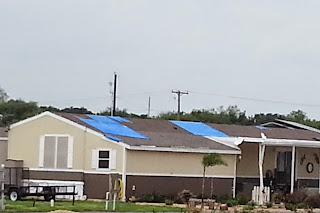 The roofs of a number of houses were punctured by debris or damaged by the intensity of the winds.

The northside fence was spread hither and yon across the entire park as if pulled up and scattered by the mighty hand of Mother Nature!

Where the north facing fence was not flattened or blown away, it was damaged in dangerous ways.

There must have been some rotation in the winds because even the fence on the west side of the park suffered major damage.

Several of our beloved old shade trees were also brought low by the storm winds.  In some cases it was only large limbs that blew down so the main tree may be salvageable.  There were, however, a few big old trees that literally turned up their roots to the sky and are dying.

Despite the widespread destruction of property, we are all giving heartfelt thanks because no one was injured.  Several homes that were damaged were empty as their owners had already headed north for the summer.  A large tree came down on a lot that was empty of its usual inhabitants and their trailer. A 4 x 4 crashed through a roof, bedroom ceiling, and came to rest on the bed.  but the bed was empty because the man who usually sleeps there was staying at the hospital with his wife who had just had surgery!  Mother Nature sometimes gets vicious, but God is good!

Posted by Anonymous at 2:08 PM