Cataloochee is a beautiful valley in the midst of the Great Smoky Mountain National Park in western North Carolina.    We had spent the morning at the Museum of the Cherokee Indian, in Cherokee, NC.   After lunch we traveled on the Blue Ridge Parkway where we encountered the following view. 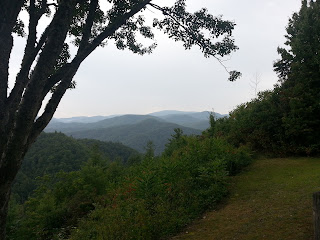 We left the Blue Ridge Parkway in Maggie Valley and headed north toward I-40 on Route 276.  Just two miles south of I-40 we turned onto Cove Creek Road having been warned that the road to Cataloochee Valley is a winding, gravel road that has some steep drop offs with no guard rails.  After eleven miles of winding roads over the mountain we arrived in the Cataloochee Valley. 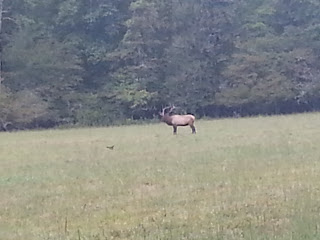 Before long we came upon a large open meadow area and saw several dozen cars stopped along the roadway.   Sure enough there was a male elk standing out in the open keeping his eye on several females not too far away.   (Of course I had forgotten the camera with the good zoom lens!) 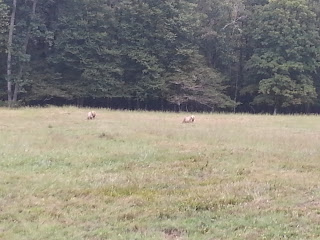 Of course the females were ignoring him completely as they munched on the fresh grass.

A variety of historic buildings have been preserved in the valley including two churches, a school, several homes, and outbuilding.   Following Indian trails, white settlers pushed into the valley in the early 1800s.   By 1910 this isolated valley was once home to some 1200 people.   However, by 1938 all but a few residents had moved out to make way for the creation of the Great Smoky Mountains National Park.

Just a short distance beyond the Caldwell place we encountered more elk.   This time a male who was too deep in the brush for a photo blessed us with the unforgettable sound of his bugling.  Hint -- you too can hear the elk bugle by clicking on this link: https://www.youtube.com/watch?v=rP1RVEJ--2A

In addition to the elk we saw dozens of wild turkeys.   Cataloochee is indeed a beautiful place.

Posted by Bruce Rosenberger at 10:19 PM