No longer are we wanderers, as we have been for the last decade.  We are now officially settlers, because ten days ago we sold our wheels.

It had worn a "For Sale" sign since early September which had drawn some inquiries, but nothing serious.  Then, about a month ago Bruce had put up a listing -- including pictures -- for it on the Escapees on-line forum.  That generated a few phone calls but, when the callers heard that the fifth wheel was not "all seasons," equipped with freezeless water and waste tanks, they were not interested.

We had moved the rig to its storage spot on our son's property in Athens County, Ohio.  We were preparing to adorn it with the "For Sale" sign again when he had a better idea: Post the sign in front of the trailer in a more visible place at the roadside.   He even crafted us an eye-catching roadside notice. 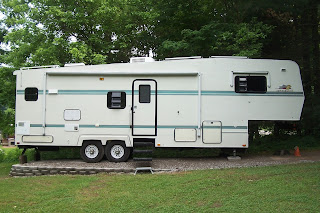 Less than a week later, a call came from a woman who lives in his neighborhood, about four miles from his house.  She was seriously interested and was not discouraged when we told her about its seasonal limitations.  Her reply was, "Well, it can't be any worse than the one I'm living in now."

A few days later we met her at the trailer's resting place and gave her the complete tour, inside and outside.  She was obviously impressed and kept saying, over and over, "This is beautiful.  Those pictures (on the on-line listing) don't do it justice."  She bought it on the spot for only $1000 less than our asking price!  She was ecstatic and we were delighted that the RV dealer who offered us only $1000 was wrong!

She is retired from the police department of Toledo and has moved back to Athens County to help care for her father.  She was living in an old 27-foot trailer on her parents' farm.  The stove didn't work, there was no storage, and the roof leaked.  So our 32-foot New Horizons in excellent condition, and with lots of storage was a major upgrade in her housing.  She says her friends refer to it as "the castle."

Her purchase of our former "home on wheels" was a blessing for us, too.  It would not have to sit empty and untended thru the coming Ohio winter, and her check will help us with an upcoming bill for dental care.  Besides that, we were delighted to see it go to a good home where it would be thoroughly appreciated.

So, we are now officially settlers, dwellers in a fixed location, no longer wanderers or footloose.  But the transition has been fun, and is almost complete.  We are already well set up for guests and, being just a mile off the Columbus, Ohio beltway, we're hoping there will be many, including you.

As soon as we get the last of the pictures hung in our little home, we may take you on a virtual tour of it via blog.  Stay tuned.
Posted by Anonymous at 3:15 PM