It’s only taken about seventy years but these last two Christmases have finally taught me something important! I’ve often wondered why Santa Claus makes that difficult and dangerous journey around the world on Christmas Eve night. He’s long past retirement age and Mrs. Claus has probably been nagging him for years to give up his Christmas travels so they could go south for the holidays.
The airways are getting more congested every year. Reindeer power is no match for supersonic jets and space ships. The elves are gradually dying off. Those that remain can’t work as fast as they used to. Toy prices have increased dramatically. The world’s population is growing at an alarming rate.

Nevertheless, Santa continues to make his whirlwind "giving trip" year after year without fail. Now I know why! It’s because "it IS more blessed to give than to receive"! It wasn’t Santa who said that but he obviously knows it’s true. Now I – and several other people – also know it, too!

Last Christmas (2010) our RV park of Winter Texans adopted a needy family in our neighborhood to assist with food and holiday gifts. Several individuals also made Christmas merrier for two other families. The outpouring donation of gifts and donated food was beyond all expectations. So, this year (2011) our seasonal community offered holiday happiness for five needy families in the surrounding community.

We contacted the public school just a few miles from our park. The staff there indicated that 96% of their students are "economically disadvantaged." The school receives governmental assistance to provide breakfast, lunch and "a brown bag snack" each school day for those students. When school is dismissed for holidays or vacations, many of those families do not have the means to feed their own children three meals a day.

The school social worker lives in the community and knows the households of her students well. She gave us the names of five families of their students who were in need of life’s basic necessities. There were 49 persons living in those five households! "How in the world would we ever be able to provide gifts and food for so many?" we wondered. Then we watched a miracle take place. 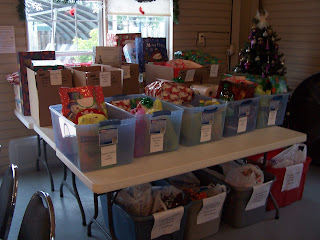 Gifts and food began to pour in from the 100 or so residents of our park. Cash donations had not been asked for but $535 of donated cash provided gifts for every one of those 49 persons! 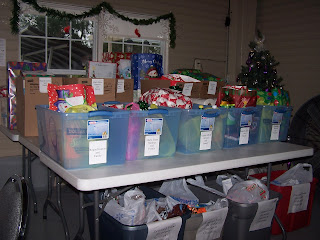 A $500 donation designated for food filled three grocery carts to overflowing at the local market. The store manager, impressed by our "spirit of Christmas giving" donated a gift card for each of the families! 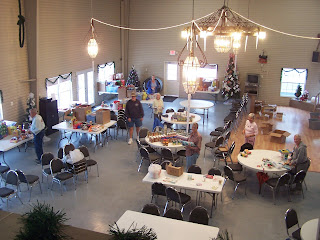 A large "gift wrapping party" of volunteers prepared boxes and bags for delivery. Other volunteers carefully divided up the donated food, assigning an appropriate amount to each household. 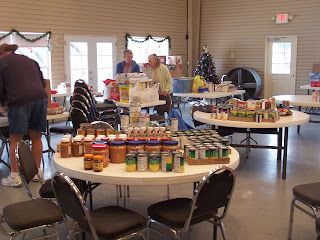 Like the biblical "five loaves and two fishes," our Christmas gifts had multiplied!
Delivery day arrived and a large cargo trailer was loaned to transport all the gifts. 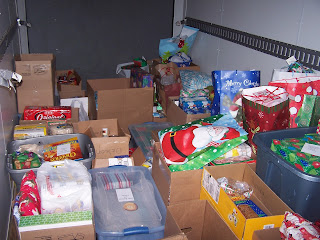 It was filled from side to side and front to back with boxes, bags and bins carefully labeled with each recipient family’s name. Then, like Santa’s subordinates on a trial run, we headed out, led by the school social worker.

Off the main highways, we traveled county roads and gravel byways from one humble home to another. Barking dogs, twinkling holiday decorations and smiling family members welcomed us at each stop. The poverty of the homes was obvious in the tiny, crowded rooms, leaky roofs, drafty walls, broken or makeshift steps, barefoot and lightly clad children. But, just as obvious, was the love and hospitality that dwelt in each home. Well mannered children were eager to help us carry the packages. There were hearty handshakes from the men of each home and an occasional hug from the women and girls.

For one of the families, our visit was a repeat of last year’s Christmas helping. But they were eager to show us their own surprise: the little house they are building for themselves! It is tiny and not yet finished but they now have sleeping space under a roof that doesn’t leak. When the house is completed, it will provide for them a kitchen and indoor plumbing!

"Gracias; muchas gracias," we heard over and over again from the adults in each home. The school age children expressed their delight and thanks in English.

Yes, those of us who delivered those gifts now know why Santa continues his gift-giving travels each Christmas season. It’s because "It [REALLY] is more blessed to give than to receive." That’s partly because, in giving, one also receives: "Gracias! Gracias! Muchas gracias!"