The menu for a church dinner depends on where it’s held. In the mid-West, it’s usually chili or spaghetti that is served. In Louisiana, folks gather to eat seafood gumbo and Po’ Boy sandwiches. In the Upper Peninsula of Michigan, stacks of pasties are enjoyed by those who gather around the tables. In Boston, no doubt, baked beans and clam chowder are the main attractions. In north Texas, barbequed ribs are popular.
In south Texas, however, everything, including church dinners, have a Mexican flavor. For over forty years, the little Methodist church we attend in Edcouch, Texas, has annually served a fund-raising dinner of enchiladas made by the members of the congregation.

For all of you non-Texans, perhaps we need to explain the nature of an enchilada. A small tortilla is rolled around one of various fillings: meat, beans, or cheese. The rolled tortilla is then nestled tightly in a pan with others of his kind and they are generously covered with grated cheese and a thick sauce. I suspect that every cook has her own favorite recipe for enchilada sauce including ground meat or refried beans, and tomato sauce, and spices which can vary from bland to three-alarm fire in the mouth! The enchiladas are then baked in the oven until bubbly and served hot with rice and beans, some type of salad and a sweet pastry for dessert.

As you can guess, making enchiladas is labor-intensive. But it’s also fun when it becomes a party! About twenty of us gathered on the appointed Saturday morning in the former fellowship hall of the church. (It and the Sunday School rooms are now rented out to a Head Start program for local children.) Tables had been set up and prepared with coverings of wax paper, stacks of warm tortillas and piles of grated cheese. 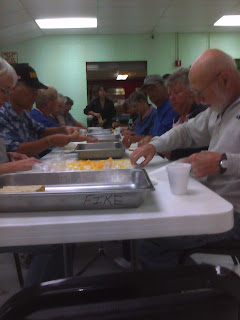 ﻿
We carefully scrubbed our hands, took a seat and began rolling the first of the 3000 enchiladas that would be needed that evening. It’s a simple enough routine but the folks who have been doing it for 35 or forty years have exacting standards for the finished product!

1. Take one warm tortilla. Put a small handful of grated cheese near one end of it. (Don’t use too much cheese or the supply will run out before we reach the magic number!)

2. Gently roll the tortilla around the strip of grated cheese until it is a compact little roll. (If you get in too big a hurry the tortilla may tear and have to be discarded – or eaten. If so, we might run out before the 3000 are prepared.)

3. Lay it tenderly in the prepared pan, lining up exactly nine of your culinary creations in each row. (It has to be nine because each serving at tonight’s feast will be three.)

Helpers kept us supplied with warm tortillas, piles of grated cheese, empty pans to replace those we filled, and wax paper so we could stack the finished product in the larger pans. Sometime in mid-morning fresh doughnuts and pastries from the local bakery were passed around. 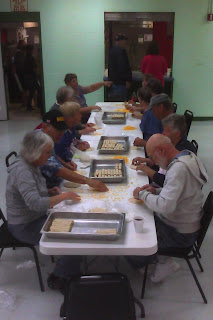 Before we knew it, we were done. We had rolled about 3000 tortillas, enjoyed several pots of coffee, finished off the doughnuts and pastries, caught up with local news, discussed some church business, admired the homemade pies coming in for the upcoming feast, and begun to set up for the evening’s event.

We’re glad we’ve had the opportunity to learn this new south Texas skill! No doubt it will be invaluable to us in our old age! After several years of experience as described above, our advice to you is this: never roll enchiladas alone. It’s lots more fun in a crowd!
Posted by Bruce and Mary Sue at 10:19 PM