BIKING AND BIRDING AT BENTSEN

Last Thursday was a fun day. Thursday is the day for our weekly bike ride, but this week seven cyclists were joined by ten bird watchers for a joint trip to Bentsen-Rio Grande Valley State Park. Our birding buddies had engaged a naturalist and a tram for a couple of hours for a pleasant and informative trip around the park. We bicyclists rode close enough to the tram to hear the commentary of the naturalist. 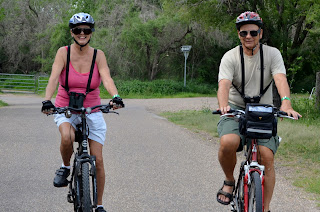 The park is on the Rio Grande River, south and west of McAllen.  The nearest city is Mission.  The Web site of the Texas Historical Markers Commission describes the interesting history of Bentsen-Rio Grande Valley State Park:
“Marker Number: 376
Marker Text:
Before colonization, this valley was a lush thicket of woodlands and brush, nourished with rich soil deposited by the Rio Grande. Throughout the lower valley the landscape represented a broad variety of plants and animals. Types more common north of the river coexisted here with those more common to the south.
Land grants were made to the original Spanish settlers of the Rio Grande Valley in the 18th century. The divisions were called porciones, each a narrow strip of land with access to the river. The grant here was part of porcion 50, awarded to Jose Antonio Zamora by the ancient jurisdiction of Reynosa (Mexico).
At the beginning of the 20th century, developers and farmers began large-scale clearing of the land. By the 1930s, much of the Rio Grande Valley had been cleared for citrus groves.
In 1944, more than 586 acres of native landscape here were saved and donated to the Texas State Parks Board. Cedar elm, hackberry, and mesquite mix with ebony, Mexican ash, and anaqua trees. Along with the brushlands, they provide habitat for countless mammals, reptiles, and resident and migrant birds. The park preserves a part of the valley's ancient environment for the education and enjoyment of its visitors. The parkland was donated on January 28, 1944 to the State Parks Board by Lloyd M. and Edna Ruth (Dolly) Bentsen, and Elmer C. and Marie J. Bentsen.
Texas Sesquicentennial 1836 - 1986.”


The donors of the land were the parents and uncle and aunt of the well-known Texas Senator Lloyd Bentsen.  The naturalist shared with us the story that the Bentsens’ original intent for the land was to clear and cultivate it.  However, on a careful survey of the acreage, the Bentsen men came upon an impressive large grove of Texas ebony trees.  In the shade of those majestic trees, they agreed that the land was too valuable in its natural state to be cleared for cultivation.  Immediately they began making plans to donate it to the State Parks Board for preservation.

The park currently includes 764 acres and serves as the headquarters of the World Birding Center and its nine birding locations in the Rio Grande Valley.  It is a prime site for bird and butterfly viewing.  More than 325 species of birds and 250 species of butterflies have been identified within the park.
Some of the birds we saw on our trip last Thursday are unique to the Rio Grande Valley.
A few of the most brilliant and beautiful are:
the green jay 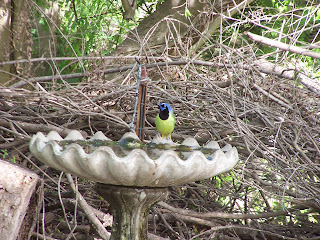 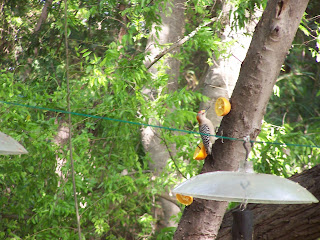 and the Altamira oriole. 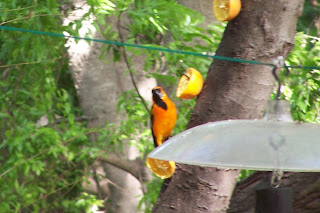 Certainly one of the most entertaining birds of south Texas and north Mexico is the Chachalaca. 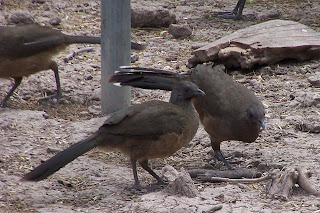 This fascinating little creature is sometimes called the Mexican chicken.  They usually travel in groups and can be very assertive and raucous, especially when food is involved.  Their name mimics their noisy call and, in fact, comes from a phrase meaning “talks too much.”

The weather for our biking and birding trip was perfect; sunny with temperatures in the low 80s.  (“Chamber of Commerce weather” they call it around here!)  The company was great and the naturalist was quite knowledgeable.  So even strong winds and a bit of sun pink couldn’t tarnish our sparkling "triple B" day!
Posted by Bruce and Mary Sue at 9:43 PM