Yesterday, I helped make a rainbow! Not a real one, mind you. None of us has that kind of divine power! It was the centerpiece of decorations for the up-coming community dinner. Some friends and I created our masterpiece on a styrofoam board, out of crepe paper, tissue paper, glue sticks and staples. It was a time-consuming job, but the red, orange, yellow, green, blue, indigo, violet result was an attractive imitation of the real thing. 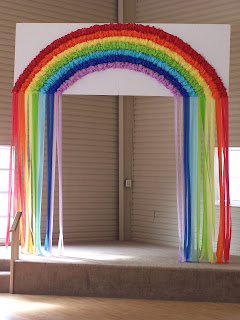 That process of playing creator started me thinking. The rainbow is more than just a brightly colored sky ornament which proclaims the rain has ended. Since Old Testament times, it has been a sign of hope. That seven-colored arc was God’s sign to Noah that the flood was over, once and for all. The folk tradition says that leprechans know where there is a pot of gold to be found at the rainbow’s end. Dorothy, in the Wizard of Oz, sang of a land "somewhere over the rainbow... where troubles melt like lemon drops...." Most of us, when spying that graceful display of celestial colors, smile with the hope that things are going to get better.
So, as we cut and pasted yesterday, I realized that I needed that seven-colored harbinger of hope. Why? Well, for nearly ten years, the little RV park that serves as our winter home has been a refuge of peace and security; an island of tranquility in the midst of the world’s sea of turmoil and trouble. This season, despite the wall that surrounds our peaceful little park, some of the problems of the world have disrupted our peace and quiet.
Last fall, one balmy night, many of us were awakened by an ear-splitting explosion. Fire was immediately visible just outside the park’s surrounding wall. Staff quickly awakened all residents on the endangered side of the park, and we watched as an enormous blaze lit up the night sky. We learned later that a semi-trailer truck had been hijacked, dumped along the tiny country road just outside our park, and torched. We breathed a sigh of relief that no one we knew had been hurt.
During the winter, several stash houses were raided in the small town five miles away where most of us do our grocery shopping. Illegal immigrants, who had paid hefty fees to a guide for help in crossing the border, were then immediately confined to one of many dingy, run-down, over-crowded stash houses by their guides. Sometimes the immigrants are forced to work without pay; others are held while their captors attempt to collect ransom from their families.
This spring, some of us have been awakened night after night by the sound of gunshots fired nearby. Two weeks ago, our neighbors around the corner in our park heard the sound of breaking glass. They went looking for the source of the sound and found a bullet hole in their front window and the bullet lodged in the window blinds. No one was hurt, but many of us were shaken by the proximity of the danger.
Two weeks ago, within a mile, there was an incident of road rage. One driver allegedly cut another driver off in the flow of traffic down our road. The second driver pursued the first, cornered him, and then told a juvenile in his car to shoot him. The second driver was shot in the face with a shotgun. He survived, but is hospitalized in San Antonio.
Three days ago, on our morning walk, we noticed a column of thick gray smoke rising just outside our park’s main gate. A friend went out to investigate and reported that, on a deserted little gravel road, someone had torched a van bearing California license plates. Such disposal of stolen cars is so common that this incident didn’t even make the news!
So, as a result of these invasions of my peace and quiet, I needed a sign of hope; a rainbow for Easter. Our human-crafted replica of God’s heavenly bow now hangs in the gathering room of our park for all to see. It reminds me that Easter is a season of hope, despite the tragedies and insecurities of life. A rainbow, in all its seven-colored glory, declares to us:
"How Our Problems Evaporate."
Posted by Bruce and Mary Sue at 9:32 PM