We headed toward New York City!  We've always avoided it in the past, going round it on a way-out outer belt.  But this time, Bruce had found information about an RV Campground in Jersey City just across the Hudson River from The Big Apple.  So, we pumped up our courage -- and our tolerance for heat since they said their full hook-up sites were all reserved -- and we drove into downtown Jersey City to the Liberty Marina and RV Campground.  We were rewarded with an open site with full utilities.  How thankful we were for the air conditioning with temperatures and humidity in the low 90s! 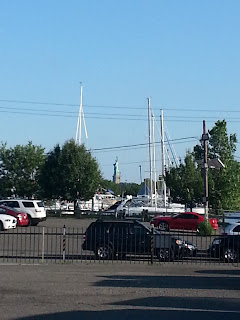 Just as the advertisement said, we could, indeed, see the Statue of Liberty from our campground!  She was almost hidden by the RVs packed in so closely together, the cars in the parking lot next door, and the masts of the many boats in the marina on the bay.  We could see her -- but we wanted a closer look! 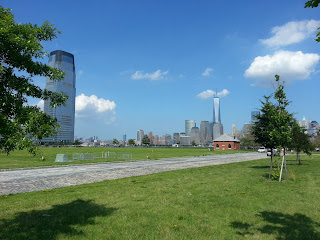 So, Summer Tour 2013 Stop #23 was a walking tour of Liberty Park.  The park is on the Jersey side of the Hudson River directly across from downtown New York City.  The above view shows the skyline of Jersey City on the left and, in the distance toward the right, the high rise buildings of New York City. 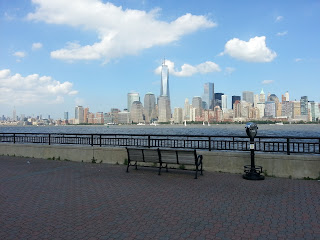 The new One World Trade Center building, towering 1776 feet into the air, dominates the waterfront skyline. 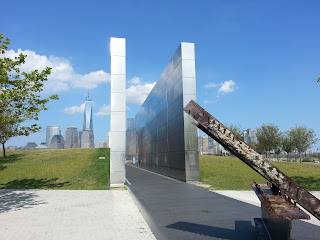 Directly across the river from that new building there is a 9-11 memorial in Liberty Park. The scorched and twisted steel beams are reminders of the physical damage caused by two aircraft used as weapons.  Inside the the two upright walls are inscribed the names of some of the victims of that attack, a reminder of its human toll. 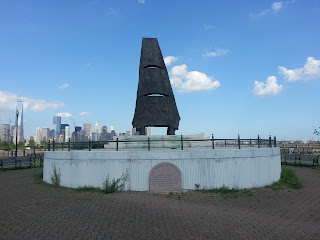 Other less famous memorials also grace Liberty Park, such as this Bridge of Nations. 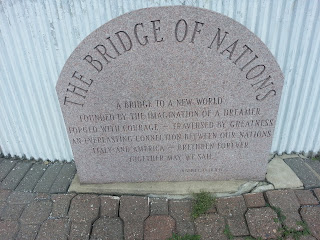 But we had come to see Lady Liberty!  So we began walking along the Hudson River walkway toward those two famous islands out in the harbor. 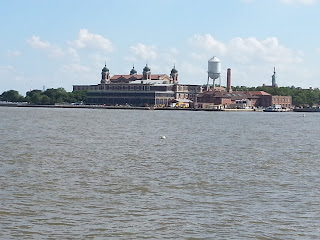 First, we came to Ellis Island, the arrival point of over twelve million immigrants to the United States between the years of 1892 and 1954. (Descendants of these immigrants are estimated to make up one-third of the U.S. population.)

This island had served the Native Americans as rich oyster beds, and the New York military as a gun battery.  But, in 1890, the Federal government allocated $15,000 to convert it into an immigrant intake center as the numbers of persons coming from other countries to live in the United States swelled.  The high point of its use was in 1907 when 1,004,756 persons passed through the Ellis Island center.

In 1990, parts of the facility were converted into a Museum of Immigration, open to the public. 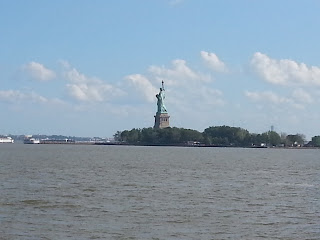 Finally, a little beyond Ellis Island, is Liberty Island with its famous inhabitant, The Statue of Liberty.  She is 151 feet, 1 inch tall and stands 305 feet and 1 inch on her pedestal.  Her proper name is "Liberty Enlightening the World."  She was designed and built by French sculptor Frederick Auguste Bartholdi and presented to the United States as a gift from the French people in 1886.

She is modeled after the Greek goddess of freedom, Libertas.  She holds aloft a torch in her right hand and in her left hand is a book, representing the law, which is inscribed with the date 4 July 1776.  At her feet lies a broken chain.

She was received gratefully by the American people, who had raised the money to build her pedestal.  However, there were critics among the populace.  The dim glow of her original torch prompted one to complain that "[she looks] more like a glow worm than a beacon!"

In 1883, noted New York poet Emma Lazarus, wrote a poem entitled "The New Colossus" to help raise money for the statue's pedestal.  A portion of that poem is engraved on the base of Lady Liberty:
"...'Give me your tired, your poor;
Your huddled masses yearning to breathe free;
The wretched refuse of your teeming shore.
Send these, the homeless, tempest-tossed to me.
I lift my lamp beside the golden door.'"

May Emma Lazarus' words outlive the Border Wall in defining our nation's stance on immigration!

Posted by Bruce Rosenberger at 10:11 PM