Philly on the Fourth (almost!)

The Fourth of July holiday week-end found us in Somerdale, New Jersey visiting another cousin and family.  Philadelphia, the cradle of U.S.independence, is just across the Delaware River from New Jersey.  So, on the 3rd of July, we took the PATCO (Port Authority Transit Company) train from Somerdale into downtown Philadelphia to meet and have lunch with yet another cousin and his wife, our summer tour stop # 22.

After a delicious lunch at a nice Italian restaurant, our Philadelphia cousin took us on a walking tour of some of the downtown sights of the city.  We intentionally stayed away from the Independence Hall area of the city, fearing the holiday crowds would make sight-seeing difficult. 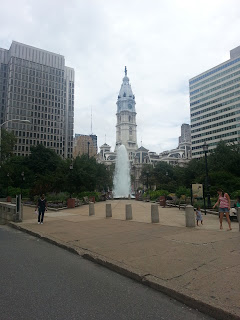 John F. Kennedy Plaza, where this fountain welcomed us, was one of our first stops.
Behind the fountain, the Philadelphia City Hall is visible with a statue of William Penn gracing its peak. 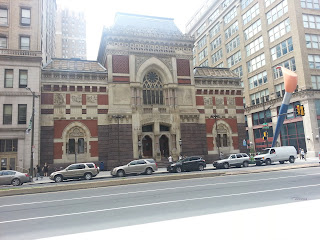 Philadelphia School of Art and Design introduced us to several interesting and creative sculptures.
First, the enormous orange-tinted paint brush seen to the right of the school building. 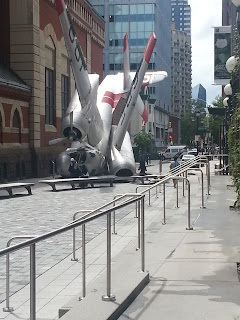 Even more unique was this sculpture entitled "Grumman Greenhouse" by Jordan Griska. 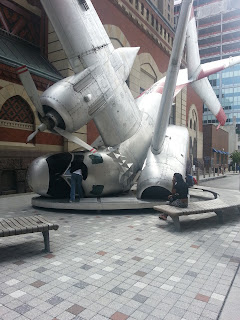 He has used a crashed World War II bomber to make a strong social statement, 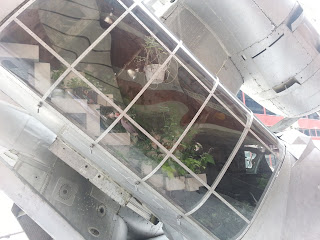 for the inside of the wrecked plane is filled with live, flourishing plants.
It raises the unspoken question: could other tools of war be turned into peaceful uses? 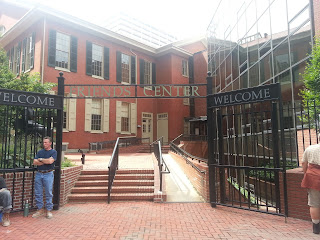 Our tour was drawing to a close as we walked past the Friends Center (administrative offices of the Society of Friends) and the nearby Friends Select School.  Our cousin-guide had retired from the school after years of teaching and serving as Assistant Head Master.

We had a round of good-bye hugs as the rain drops began to fall lightly again.  He climbed aboard his bus home and we headed for the PATCO train that would take us back to New Jersey.  It wasn't quite the Fourth of July but it was a great celebration after several years since our last visit!


Posted by Bruce Rosenberger at 8:18 PM