Samuel Langhorne Clemens (better known by his pen name, Mark Twain) was born in the tiny village of Florida, Missouri, on November 30, 1835, six months after his family arrived there from Tennessee.  Today his birthplace is surrounded by an 18,000-acre lake bearing the famous writers name, Mark Twain.   The lake was created by the construction of the Clarence Cannon Dam project -- named for the Congressman who secured funding for its construction. 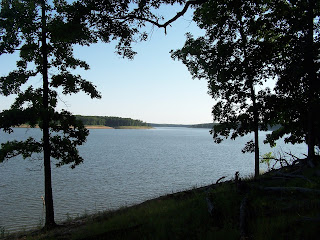 In addition to the Mark Twain Birthplace in Florida, MO, there is the Mark Twain State Park, four U.S. Army Corps of Engineers campgrounds, and numerous day use areas around the lake. 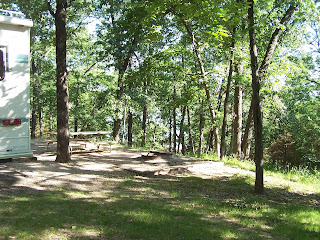 We enjoyed a campsite overlooking Mark Twain Lake in the Indian Creek Campground operated by the Corps of  Engineers.  The $18.00 per night fee is discounted with a U. S. Golden Age Passport card for a final cost of $9.00 per night.

Mark Twain spent his boyhood years in Hannibal, about 30 miles from his birthplace but he spent summers on the farm of his uncle Judge John Quarles at Florida.
Posted by Bruce Rosenberger at 9:34 PM