Guthrie began its life as a dusty prairie stop along the AT&SF Railroad. On April 22, 1889,  the day of the Land Run, (sometimes referred to as Harrison's Hoss Race), Guthrie had its first incarnation as a destination, becoming a city of 10,000 people by nightfall.

Located in the Unassigned Lands of the Indian Territory, Guthrie had been chosen as a site for one of the Federal Land Offices where land seekers were required to file claim to their parcels. By the evening of April 22, a tent city already dominated the landscape. Wooden buildings soon replaced the tents spreading across the hills along Cottonwood Creek. Guthrie became one of the largest cities west of the Mississippi and was quickly known for its beautiful buildings built of red brick and native sandstone.  (quoted from www.guthrieok.com)

Guthrie became the capitol of Oklahoma in 1890 and remained the capitol until the citizens of the state voted in 1913 for Oklahoma City to become the state capitol. 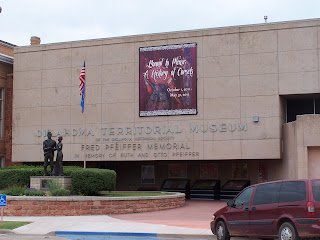 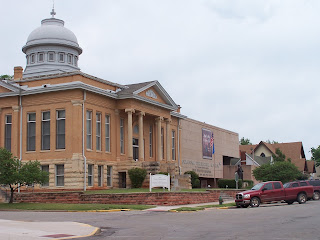 At one time it appeared that the Indian Territories and the settler territories would become states separately.  However, in the long run the two were united and became one state -- Oklahoma.  The statue below depicts the symbolic wedding uniting Miss Indian Territory and Mr. Cowboy Oklahoma on statehood day, November 16, 1907, as the two territories came into the Union as one state. 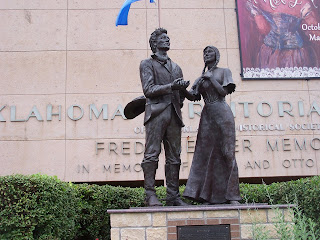 Below is a replica of a home built near Guthrie, Oklahoma, just after the land rush of 1889. 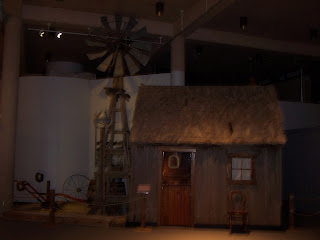 The Oklahoma Territorial Museum tells the fascinating story of the land rush of 1889 as well as four other land rushes and two lotteries through which the U. S. government opened up for settlement lands which had previously been promised to Indian tribes.

It was in the Land Rush of April 22, 1889 that the term "Sooner" came into being.   "Sooners is the name given to settlers in the midwest of the United States who entered the Unassigned Lands in what is now the state of Oklahoma before President Grover Cleveland officially proclaimed them open to settlement on March 2, 1889 with the Indian Appropriations Act of 1889. The name derived from the "sooner clause" of the Act, which stated that anyone who entered and occupied the land prior to the opening time would be denied the right to claim land."  (quoted from Wikipedia)
Posted by Bruce Rosenberger at 5:07 PM