This evening we are staying in the campground at Graham Cave State Park, just off of I-70 near Danville, Missouri.  Central to the State Park is a Native American archeological site called Graham Cave. 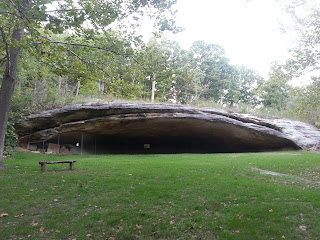 Signage at the site states that "Archaeological evidence indicates that people lived in Graham Cave for about 10,000 years.  The people who occupied Graham Cave did not stay in one place throughout the year.   They moved with the seasons to take advantage of the bounty of the land as resources became available.   During most of its use, the cave probably did not serve as a year-round base camp, but rather functioned as a fall gathering camp, a wintering station or a spring hunting camp." 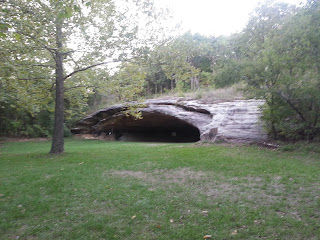 Between 1949 and 1961 the University of Missouri and the Missouri Archaeological Society excavated the cave studying and preserving the artifacts.

The 10,000 year history of the peoples represented here puts our nation's short history into perspective.
Posted by Bruce Rosenberger at 9:24 PM