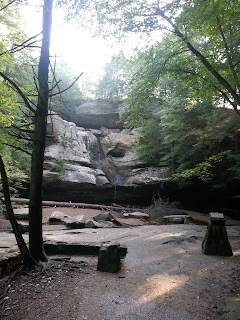 The water of Cedar Falls flows over a 50-foot cliff into a steep-walled gorge. 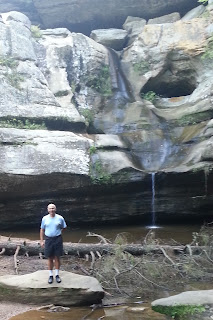 At the end of summer the volume of water is less than at other times, but the vista is still impressive. 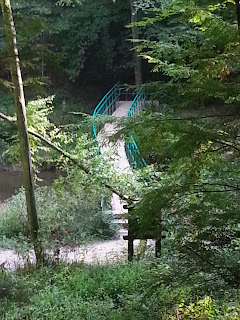 The path to Cedar Falls crosses the stream several times -- including at this unusual bridge.  In January of 1998 a flood of massive proportions ripped its way through the gorge and destroyed or removed almost all man-made structures.  When this bridge was rebuilt the decision was made to reuse the main "bent" steel girders as a reminder of what will come again some day.   The bridge is a great example of the power of the water that formed this entire gorge.   Such a flood occurs only once in 100 years.

After visiting Cedar Falls we drove the short distance to the Ash Cave site where a wheelchair accessible path enables visitors to enjoy the majesty of the cave. 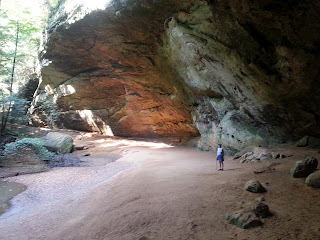 Ash Cave is the largest recess cave east of the Mississippi.  It stretches 700 feet across and rises 90 feet high. 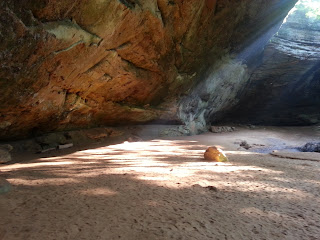 As late as 1886 the floor of the cave was still covered with ashes. Were they the result of the manufacture of gunpowder by early settlers? Or were they the accumulated remains of countless campfires used by the Native Americans who inhabited the shelter for untold centuries? We may never know for certain the source of those ashes from which Ash Cave took its name.
Posted by Bruce Rosenberger at 4:17 PM