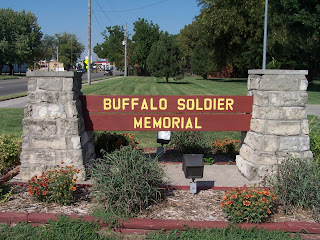 Long ago, when our son was a teen-ager, one of his favorite popular singers﻿ was Bob Marley.  He especially liked Marley's song about the Buffalo Soldiers and he would listen to it over and over.  At that time I had never heard of the Buffalo Soldiers and had no idea of their impressive history.
But today at Pawnee Park in Junction City, Kansas, we learned much more about these heroes.  They are celebrated in Bob Marley's song and in an impressive monument in downtown Junction City, the home of Ft. Riley military base, but almost no place else. 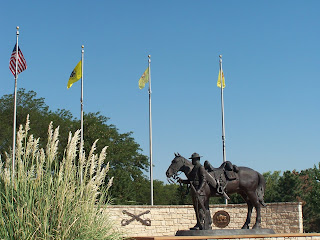 In the center of the monument stands a﻿ larger-than-live bronze statue of an African-American soldier in full military uniform of the late 1880s.  His left hand holds his rifle and his right hand grasps the bridle of his horse, saddled and carrying his bedroll and provisions.
From bronze plaques aroung the perimeter of the memorial we learned much more about the Buffalo Soldiers.  During the Civil War about 180,000 "Colored Troops" fought alongside others for the Union cause.  At war's end they were free and justifiably proud of the role they had played in that military victory.
The following year, Congress authorized the formation at Ft. Levenworth, Kansas of four regiments of African-American soldiers, two infantry units and two cavalry units.  Colonel Benjamin Grierson and Edwin Hatch immediately began recruiting for volunteers to create the 9th and 10th Cavalry Regiments, both comprised completely of Negro soldiers.  Racial prejudice at Fort Levenworth was so widespread and intense that in 1875 the cavalry units were moved to Ft. Riley, Kansas, and the infantry units to Louisana and Texas. 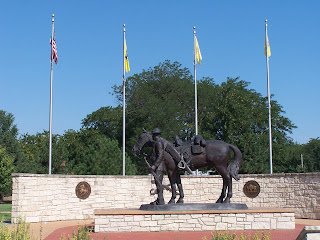 Their first active combat service was in the many and various Indian wars.  They fought Apache, Comanche, Lipan, Sioux, Kansa, and other tribes to secure the American West for settlement.  They were officially called the "Negro Cavalry" but it was in these battles that they earned, from their brown-skinned foes, their popular name, "Buffalo Soldiers."  Wikipedia records an incident that explains that name:
In September 1867, Private John Randall of Troop G of the 10th Cavalry Regiment was assigned to escort two civilians on a hunting trip. The hunters suddenly became the hunted when a band of 70 Cheyenne warriors swept down on them. The two civilians quickly fell in the initial attack and Randall's horse was shot out from beneath him. Randall managed to scramble to safety behind a washout under the railroad tracks, where he fended off the attack with only his pistol until help from the nearby camp arrived. The Indians beat a hasty retreat, leaving behind 13 fallen warriors. Private Randall suffered a gunshot wound to his shoulder and 11 lance wounds, but recovered. The Cheyenne quickly spread word of this new type of soldier, "who had fought like a cornered buffalo; who like a buffalo had suffered wound after wound, yet had not died; and who like a buffalo had a thick and shaggy mane of hair."

The name soon was extended beyond the 9th and 10th Cavalry Regiments to refer to all African-American soldiers.  The Buffalo Soldiers earned 23 Medals of Honor for their service in the Indian wars.

In addition to pacifying the West, Buffalo Soldiers insured the safety of those laying tracks for the transcontinental railroad, protected riders who carried the mail, and strung miles and miles of telegraph wire thru dangerous wilderness areas.  In the early 1900s, these brave black soldiers patrolled and secured the U.S./Mexican border frtom the raids of Pancho Villa and his "villistas."

Back home at Ft. Riley, however, they and their families were strictly confined to an area of small segregated housing.  An abandoned theater in the area served them as a "blacks only" USO.  Some remember that the uniforms, weapons, equipment, and horses issued to them were often used or inferior.

In the Spanish-American War, Buffalo Soldiers served in Cuba and the Philippines.  They served as the earliest "park rangers" in several of the western national parks before the creation of the National Park Service in 1916. In World War I, the 9th and 10th Cavalry Regiments again patrolled the Mexican border where they engaged in combat with Mexican troops and captured many German nationals, preventing them from entering the U.S.  In World War II, they served in North Africa under General Benjamin O. Davis.  In 1944, about a decade before President Harry S. Truman de-segregated the U.S. military, the 9th and 10th Cavalry Regiments, the Buffalo Soldiers," were disbanded.

Those who served and their families and friends resolved that this remarkable history of military service by the Buffalo Soldiers would not be forgotten.  Donations from individuals, agencies and businesses funded the creation and construction of this memorial in Pawnee Park "within sight of the racially segregated family housing built by the government for black soldiers and their families."

This memorial insures that the world will remember the Buffalo Soldiers.  In spite of hardships and prejudice, the 9th and 10th Cavalry Regiments of the United States Army lived up to their mottos: 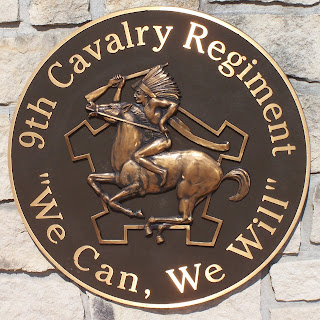 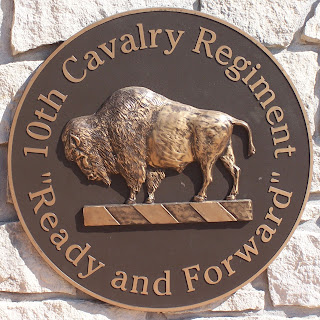