Independence, Missouri, was the principal"jumping off" point for all three of the major western trails -- the Santa Fe Trail, the Oregon Trail, and the California Trail.   Although Independence was a frontier village of just several hundred people it was the place where wagons were purchased, loaded, and organized into trains for the trip west. 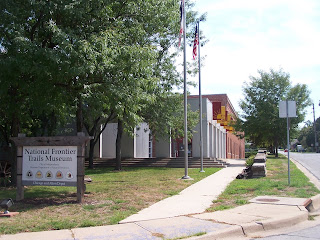 Today we enjoyed a visit to the National Frontier Trails Museum in Independence, Missouri.  Here we saw a video and many displays which recall the saga of what is believed to be the greatest voluntary, overland mass migration in the history of the world -- the overland migrations across the American West during the 19th century. 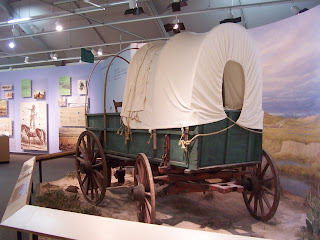 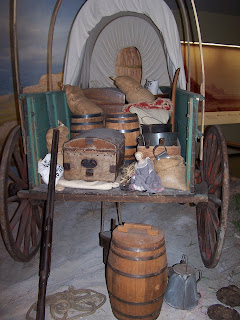 An emigrant wagon with the average 10-by-4-foot bed could not hold very much.  Foodstuffs headed the list and were chosen according to what would keep without spoiling.   Cooking utensils, clothing, bedding, weaponry, tools, and spare equipment rounded out the inventory of essentials for emigrants'  survival.   "Nice-to-haves" included those things not essential for survival but helpful to have on hand like medicines and bandages, tallow, lanterns, spy glasses, scissors and sewing notions.  Luxuries would be the last things to pack and the first things to throw out when the oxen began to tire. 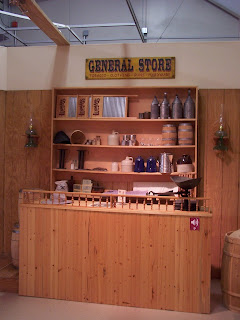 This reconstructed "store" in the museum represents one of the places
where the emigrants went to buy provisions for their trip. 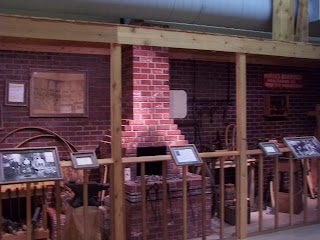 The blacksmith shop was also essential in outfitting
the emigrants for their westward journey.
Despite the dangers of the journey, crossing swollen rivers, facing massive buffalo herds, possible Indian attacks, crossing wide expanses of desert and rugged mountains, historians report that an estimated 90% of those who began the journey west reached their destinations.
Posted by Bruce and Mary Sue at 10:56 PM